As my school year started, I knew I wanted to make mindset play a key role in my student’s day.  Each day a bell ringer greeted my class, and almost every day that bell ringer had something to do with mind set, character education, or ethics.  We discussed how to deal with losing in sports, how to handle getting a bad grade on a test, how to challenge one’s self to possess a better character, what to do if you found a lost wallet full of cash.  Yet, it became apparent, pretty quickly, that my class needed something more. 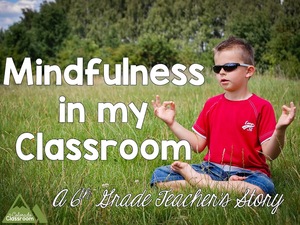 Behavior – bad behavior, or poor choices – was at an all time high in my class.  Our daily bell ringers, weekly character lessons, school PBS (Positive Behavior System), student affirmations, and classroom incentive program had done nothing to sway the rampant disrespect and disregard I had seen throughout my classroom.  I had tried all of my usual classroom management tricks and nothing had an effect.  That was…until my teaching assistant and I had an interesting discussion one warm October day, when we both shared with one another about our success with meditation and mindfulness on a personal level. 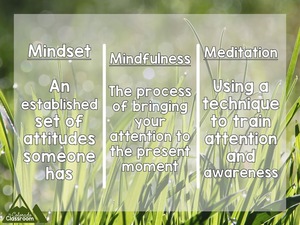 As we both had been experimenting with meditation and mindfulness, seeing the benefits of calmness, serenity, and focus in our own lives, we thought maybe the class could see those benefits as well.  Within days I started my class on daily meditation, through an app I got on my iPhone, and almost immediately we started seeing results.

I tried the meditation and mindfulness at two different times of the day, after recess, and after lunch, finally settling on sharing our time together after lunch.  We would turn off the lights, turn on the speakers, and listen in to the message of the day.  Some kids would really hone in and focus, closing their eyes, breathing deeply, and working hard to master the techniques being taught, while others would simply color or put their heads down.  Regardless, of how they approached it, the mindfulness and the messages were working, as my behavior issues and referrals declined by approximately 30%, and our lesson content taught in the afternoons increased as well. 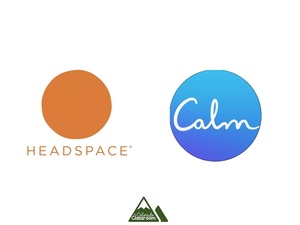 Besides trying the meditation and mindfulness at two different times, we also tried two different apps.  These are not affiliate links, just my own experience and the feedback I received from my students.  The first app we tried was called Headspace.  I got this app recommendation from a doctor I had seen, and had only tried the free sample sessions previously.  Once the kids and I got through the 10 free sessions, we then switched over and tried Calm, an app I was recommended by a friend.  The kids immediately had an aversion to the Calm app even though I thought it had more features that they would like.  The students did not like the sound of the voice and felt like it was too rushed.  They also hated the background noise of the waves crashing on the shore.  So we went back to Headspace and I bought a yearly membership.  It’s not cheap, just to warn you, although it is tax deductible if you’re using it for your classroom.  I thought the investment of less than a $1 a day was worth it, but it can be a lot on a teacher’s salary. 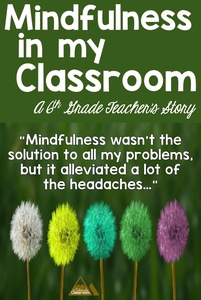 Mindfulness wasn’t the solution to all my problems, but it alleviated a lot of the headaches I was having.  It also gave me 5-10 minutes to reground and recenter myself before starting to teach again.  I enjoyed emulating and setting an example for my students and I think many of my kids appreciated having the guidance and the security to see that mindfulness is not hokey or stupid or goofy; it’s something even adults do.  One of my most difficult students was one of my best exemplars when it came to our daily mindfulness and meditation.

So if you have been dealing with behavior problems in your classroom, or a class that just comes back from specials bouncing off the wall, try mindfulness as a way to calm them down and focus them on learning.  You can use your personal device, a computer, or even just have them breathe deeply in and out for 18 seconds while thinking about where they are and what they are doing in that present moment.  Another idea is to have your students ground themselves in the moment by examining what they can hear, feel, see, touch, and taste.  This not only helps you to focus on the moment and mindfulness, it helps those with anxiety to regain control.

So give these mindfulness ideas a try and let me know how it goes in the comments below.

Get freebies, updates, and more info/posts like this sent right to your inbox.

2 thoughts on “Mindfulness in My Classroom: A 6th Grade Teacher’s Story”

Get this freebie by joining the email list before

I love brand new crayons. The smell. The feel. The

Joyce and Steve over at 1st Grade Pandamania on TP

We had fun today while cleaning and organizing and

Tried out Takenoko during our last board game nigh

I had the honor of being interviewed by Shoutout C

Pelé was one of my heroes. He was a legend on and