Menu
I have never been sky diving.  So, if I was to argue about the potential harm from sky diving, the emotional effects it has on a person, the dangers inherent in it, and how stupid you would have to be to even try it, then I would be highly criticized by those who endorse sky diving, and justifiably so.  I would be arguing from a point of view based on ignorance of the actual activity. That's why I had my daughter take the PARCC test this year, because I can't argue against something without actually seeing what it is. 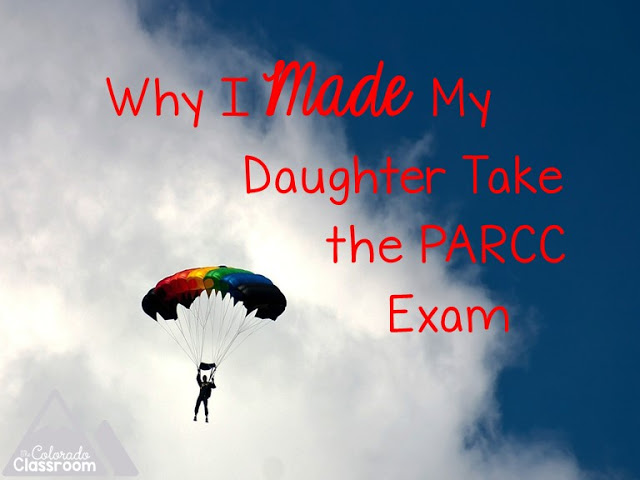 To set the stage, I left my teaching position in December, so I have not had the full-year PARCC experience that many teachers have had. Instead, I've had the parent experience, “living vicariously” through my daughter's experience with the test. I had heard all the arguments about how off base the test was for level appropriateness, but I hadn't seen the test or the results of that test compared to the level I know my daughter is at, both from former testing and day to day working with her on homework.
So, I opted her in for testing. 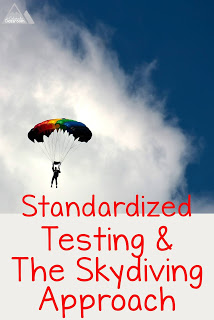 Granted, my daughter is not an innocent first year tester in third grade. She will not crumble when being asked to describe the author’s meaning divined from a poem meant for sixth graders.  Nor is she a hard core willfully defiant renegade who would sleep through the majority of testing and try to see how many ways she could annoy the proctor during the 2 hour exam.  She’s a strong, independent, hard-working eighth grader who is proud of her accomplishments, and wants to make others proud as well. Yet she knows enough about herself to not wither under someone else’s glare.  I knew I could send her into testing and receive back a happy, healthy child who was still confident that she was smart, and that the test was ridiculous.  What surprised me most is how little she actually even thought about the test and the questions it asked.  She never once questioned herself or got in the car quizzical about the day’s testing.  She simply took the test and went on with her life, being the happy and healthy 14-year-old that I love.

Besides our discussions about the test and the questions that were asked, the other reason I opted my child into the test is for the results we will get back in the next few months.  I am expecting them to come back and say that my child is wildly unprepared for the next grade and for life, when I know that to be untrue.  If this happens, it will give me yet another leg to stand on when I go to argue the lack of validity in the PARCC test and the reason it should be removed from our schools.  Having hard results in my hand for comparison’s sake will make arguments that much easier and stronger than having a 0 because I opted my child out of testing.
It will be an interesting fall and an interesting follow up to this discussion when the results are finally released, but I’m glad I chose to make my child take the PARCC test so that I can walk into a discussion with hard proof to back up my arguments when I decide to discuss the harmful and misguided PARCC exam.

Get freebies, updates, and more info/posts like this sent right to your inbox.

New 6th grade teacher? Let me help you with classr

Tried something new lately? How did it go for you?

⬆ This is why you should never apologize for hav

Don't spend another year sifting through sticky no

My daughter Reagan got to meet her favorite author